Oh hey there, 2012! Just returned from quite the epic vacation. Epic in length (~three weeks), epic in locations visited (~nine places), epic because I shot over sixteen hundred photographs, epic in the emptiness of my current bank account status (~$/Rp!?!!!??!!!! spent) and most importantly epic because my boyfriend

of four years flew across the world to visit and spend the holidays with me after eight challenging months of separation (words can’t precisely describe what it feels like to have all sorts of emotions and feelings rush back after months of actively and subconsciously suppressing them in order to cope with intense bouts of homesickness)! The past three weeks, alien-mode was put on pause, and I was allowed to be human again and join the rest of the other pizza-eating, thigh-showing, booze-drinking, sun-bathing –bule (foreigners) traveling Indonesia for the holidays.

For now, some notes from my last day of island-hopping…

(noted in my moleskin on January 10, 2012 while waiting for a ferry and while riding a shuttle van to the Lombok airport after surviving quite the choppy ferry ride from Gili Air)

Perched on a massive piece of driftwood on the harbor, I watch the shanty ferry’s dance on the shores of Gili Air, their tethers, giving, resisting, giving, resisting against the vigor of the wind. Surrounded by the commotion of the harbor traffic, all of us foreigners have the same look of nostalgia, the same look that bleeds ‘I don’t want to give up my nomadic Gili lifestyle… even if I’ve been ripped off far too many times to recount, this is the closest I’ll get to reaching paradise for the time being.’ Perhaps those were just my own thoughts.  It had been cloudy and rainy the past three days, a constant drizzle, the sky a deep death gray that blanketed the sacred Mt. Rinjani and made Lombok nearly vanish completely. Klaas and I had ‘open-date’ speedboat tickets that had been purchased while making a desperate though successful attempt to escape from the debauchery that is Kuta Beach (Bali), but now those tickets were reduced to the meaningless pieces of paper that they had originally been as the weather conditions forced the government to forbid any speedboats from going to the Lombok/Gili Islands area. You’d think it’d be terrific to be trapped on a Heaven-on-Earth’esque island like Gili Air, however when you have responsibilities to tend to and a counterpart texting you “I forgot what we had discussed for this coming semester… what are we doing?”, it makes even paradise seem like something out of Dante’s Inferno. We had the choice to take a seven-hour slow ferry back to Bali, but looking back now with the unforgiving waves of the Bali Sea, I’m not so sure the ferry would have made it! And thus, after two furious days of trying to purchase plane tickets without the help of an agent, we had no choice but to cave in… and even then the agent had issues purchasing them… and then printing them. [NOTE TO SELF: why is transportation so unnecessarily stressful in this country, especially when it comes to buying tickets?] Along with over a hundred other desperate foreigners who had meaningless speedboat tickets, we were herded onto five rickety single-rudder blue ferry’s. We looked a bit like displaced people as we boarded — you could see and feel the stress and disappointment in people’s eyes both because we were departing paradise and because of the disorganization that came with the storm, with our over-sized waterproof  backpack of belongings hugging our backsides, salt-water sculpted hairdos, with sand filling every crevice on our coral-cracked feet, with our fresh bronzed complexions adorned by weeks spent under the sweet tropical sun. Our ferry pitching and yawing, my hands gripping for dear life, one hand on Klaas’ thigh, the other gripping the side of the ferry. I pretend I’m on a log-flume ride at King’s Dominion but a violent wave challenges the ferry and interrupts that somewhat calming thought, I lock eyes with the young French boy sitting to my right, and F-word forgivingly slips from my lips. We safely arrive at Bangsal. Ignoring and speeding past hoards of men and their parched horses offering rides, trying to rip us off, we finally arrive at our designated shuttle van where a man reassuringly says to us ‘no worry, chicken curry’. Klaas and I look at one another and laugh.

Marinate on some photos while I continue to gather my thoughts… 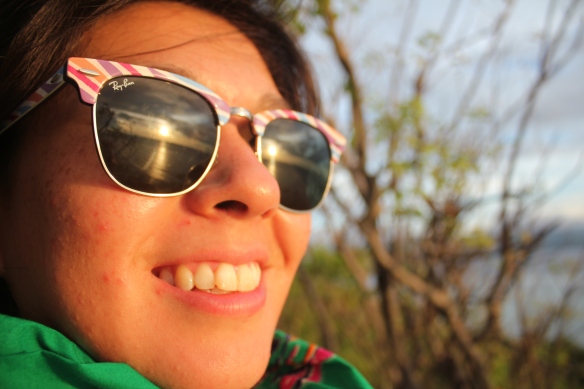 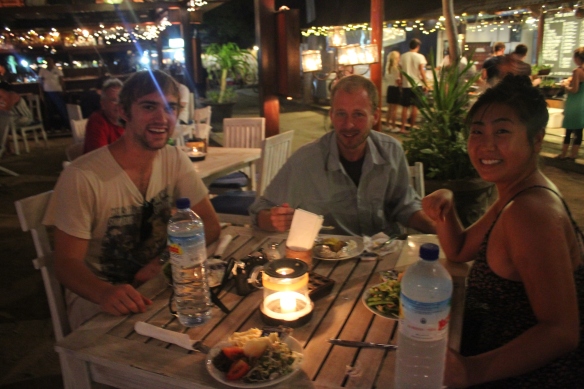 2 thoughts on “No Worry, Chicken Curry”